Located approximately one mile south of the business district of Sayre, Oklahoma, the Sayre City Park is on the fringe of the city, in a semi-rural area that travelers on Route 66 passed by as they approached Sayre from the west or departed from the east. The park is on the east side of the highway that at one time formed a direct extension of Sayre’s South Ninth Street. The park consists of an extensive area that has been partially developed with a golf course, rodeo grounds, baseball fields, and other recreational areas, but the original portion is considerably smaller and includes only the clearly defined features within about 750 feet of the highway, an area that includes the miniature golf facility, the playground, a pavilion, the swimming pool and bath house, the pump house, a large gazebo, tennis courts, and camping facilities, as well as numerous small features such as fire pits, picnic tables, and trails. The main entrance to the park is south of a rock wall where an asphalt drive turns off the old highway to the east. That drive provides the south border of the core of the park the nominated historic site as it moves to the east and then loops around to the north, returning to a point near the entrance where it forms a lopsided figure 8, the large east loop containing the swimming pool and other features, and the smaller loop on the west, near the rock wall and highway, containing the miniature golf course and playground. Although the history of the park predates most of the features, its original use appears to have been informal and used as an open, public space for recreation and camping rather than as an organized facility. The significant structures in the park date from a Works Projects Administration undertaking that was completed in 1940. These include the graceful and eminent bathhouse next to the swimming pool, a large gazebo, and a pump house to match the red stone in the others, and also a long rock wall bordering the highway. The park is on a generally flat terrain that has scattered deciduous trees of varying sizes and ages. Sayre City Park includes a variety of minor resources, like park benches, tables and firepits, that clearly and obviously date from the period of historic significance (such as park tables and benches that use the same materials and construction methods as the larger features in the park). While not counted individually they contribute to the property’s historic significance. Other features that are portable, including some tables and refuse receptacles, are also scattered in the area and are noncontributing.

Clearly the centerpiece of the park, the swimming pool and bathhouse are located near the entrance to the park, which is to say also near the highway, separated from the highway by the rock wall and the miniature golf course. The bathhouse and pool were constructed in 1940 as a WPA project and represented the major design element of the park as it transformed from open public space to organized recreation area. The building is constructed in the Pueblc Revival style, with its flat roof, vigas, and rough hewn wood windows. It does, on the one hand, exhibit elements of the Romanesque style with rough-faced stone, arched entrance, and tower. It is best classified, though, as Pueblo Revival. The building is made of rich, red native stone, but random stones have been painted white for accent. The bathhouse faces west toward the highway and that elevation includes a central, dominating arch entrance, flanked by high windows; a round tower rises at the northwest corner of the building. The arch is the centerpiece of the elevation, both literally and figuratively, and it immediately commands attention because of its careful masonry, because it springs from the floor, and because it has been highlighted with white paint. The keystone holds a shield medallion indicating the WPA origin of the building. The arch forms an open passage into an entryway that channels swimmers to either the left or right for the men’s or women’s dressing rooms. The interior of that vestibule is the same stone, again painted white. On either side of the arch, horizontal windows are divided into two sections with wood surrounds, and are barred horizontally with rough-hewn wood positioned horizontally. It is important to note thai the ashlar, a native red sandstone, is laid in broken rangework and the rustication is noticeable where the face contrasts with the dressed corners. The coping lining the straight parapet is painted white and supports a metal rail that surrounds the deck on the roof of the structure. Beneath the coping on the west elevation a row of a dozen vigas projects outward, pueblo style; their ends have been painted white. The tower at the north end of the elevation is round with a conical roof. There is an entrance into the base of the tower on the south curve, near the main building, but more noticeable is the outdoor stairway that winds up and around the tower onto the deck. The handrail, of the same stone and white coping, gracefully winds with the stairs. On the upper level of the tower, a narrow window is behind wooden louvers on the west, and a doorway is on the east, opening onto the deck. As the handrail winds around to the north elevation, it merges into the parapet that surrounds the deck on the roof of the bathhouse. Beneath it, the north elevation includes a single window, in this case a vertical opening with horizontal rough-hewn wooden bars. A metal utility container obscures part of the view of this elevation. Except for the random blocks painted white, the east elevation is perfectly symmetrical with three doorways leading from the changing rooms and service area onto the concrete apron surrounding the pool. These doors are flanked by similar horizontal windows with wooden bars. The south elevation is of the same masonry as the others, again with random blocks painted white, and with a single horizontal window with rough-hewn wooden bars. The swimming pool is located immediately east of the bathhouse and is a rectangular concrete structure, deeper at the south end where diving boards are strategically placed. Ladders and lifeguard posts are located around the pool. Modern pool circulation, water treatment, and filtration equipment is located on a concrete slab south of the pool, completely enclosed by chain link fence, and is noncontributing. A chain link fence surrounds the pool and bathhouse complex, but it appears the fence was added in later years and while the bathhouse and pool are both contributing features, the fence is not.

Located south of the pool, the pump house is a square building of the same stone material as the bathhouse. Even on this humble utility structure, the dressing of the ashlar demonstrates careful craftsmanship and this building is an important feature of the park, both functionally for housing the chemical and pumping apparatus, and architecturally. A simple wooden plank door is on the east elevation, but there are no other features on the other elevations. The rock is flat with a plain white cornice wrapping around the top of the building. A chain link fence surrounding a concrete pad on the east of the pump house is noncontributing, but the pump house is a contributing feature.

South of the pump house, a large brick building containing restroom facilities, with pitched gable roof with overhanging eaves has been added since the period of historic significance and is therefore noncontributing.

Modern tennis courts are located east and slightly south of the pool. These are regulation size courts, added to the park since the period of historic significance. Despite their substantial size, they are located on the periphery of the cluster of historic features and are unobtrusive.

A large octagonal gazebo is located straight east of the pool. This structure, constructed in 1940 as part of the WPA project, is made of the same red sandstone as the bathhouse and consists of a low rock wall with pilasters at each of the eight comers from which metal supports rise to provide a frame for the octagonal-cone roof with asphalt shingles. The gazebo has a concrete floor at a level about a foot above the surrounding terrace and visitors enter the structure through an opening in the rock wall on the east elevation. That entrance includes two sandstone steps on the outside. A center post in the middle of the gazebo rises from the floor to provide additional support for the roof. The gazebo is a contributing feature.

North and east of the swimming pool / bathhouse is an open-air pavilion of modern construction. Built with steel piers supporting a low-pitched metal roof on an east-west axis with a wall at the west end, this is a noncontributing feature.

The 18-hole miniature golf course is located west of the bathhouse, but separated from it by a paved drive, and east of the rock wall lining bordering the park near the highway. A chain link fence surrounds the course. This miniature golf course is not like many of its counterparts elsewhere in that it retains a simple profile without the technologically and commercially contrived obstacles like revolving windmill blades and rotating statuary that emerged in the period after 1955. Aside from the curbed putting surfaces, which have changed over the years, the two conspicuous built features of the course are an octagonal service building located on the east central perimeter of the course, and a circular raised garden area on one of the links. These features echo other contributing buildings in the park, namely the tower on the bathhouse and the gazebo, but have clearly been added in recent years, are built of different materials than the other historic features, and are noncontributing.

The playground is located directly north of the miniature golf course, just east of the stone wall. It primarily consists of modem brightly colored steel and synthetic playground equipment. It is noncontributing. Stone wall In addition, the wall includes pilasters on its east elevation for additional support in its retaining function. Using the same broken range work found in the other WPA buildings, the stone wall also utilizes some stone that is lighter in color, some which contains a band of red and a band of gray. The stone is not painted (or the paint has weathered away) and the wall maintains a beautiful texture and varied coloration. An attractive, durable, and impressive part of Sayre City Park, the stone wall is a contributing feature. 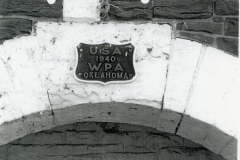 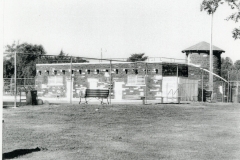 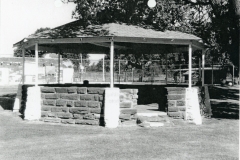 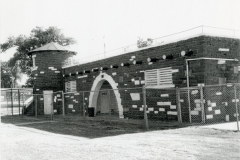 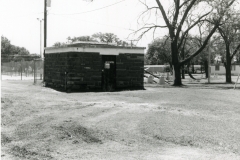 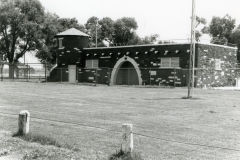 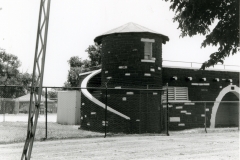 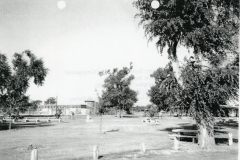