“The new Municipal Building at Ardmore replaces two old structures, one of which was used as the city hall and one as the police station, and makes possible the concentration of all of the municipal departments under one roof.

The building is three stories in height and is 72 by 120 feet in plan. The police department, offices for the street super-intendent and health officer, and space for the fire-department apparatus are on the first floor. The second floor is devoted to the council chamber, water department, city manger’s office, city engineer’s office, and a dormitory for the firemen. Half of the third floor is occupied by the municipal court and judge’s offices and the other half houses the jail.

The structure is fireproof with exterior walls of light-colored brick trimmed with stone. It was completed in September 1937 at a construction cost of $110,093 and a project cost of $116,699.” 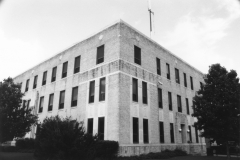 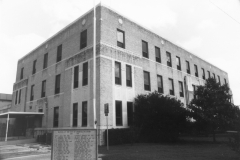 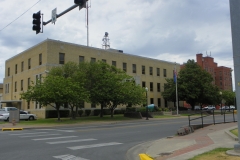