The stadium and bleachers were built with WPA funds on land donated by E.A. Walker (1933). Walker also donated land for the Armory just to the north. Built with concrete block risers on both sides (east and west) of the field having metal seats. Eastern risers have bathrooms and storage rooms beneath them with entrances on eastern (back) side and also awning windows. Western risers include press box above. New pillars were added later to support the press box and a band platform was also added. 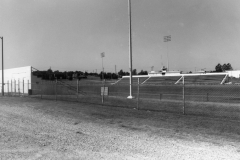 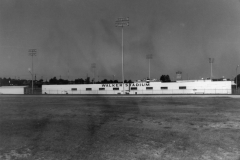