The gym is a single-story, rectangular (105′ x 74′) structure of cut, coarsed, beaded, and rusticated native stone. The roof is arched in the center of the building and flat on the surrounding area. All sections of the roof contain parapets. The front and back of the building have a stepped gable and pilasters that give the gym an art deco emphasis. The windows have red brick lentils, and some windows are covered with boards, while others are filled in with concrete blocks. A concrete building has been added to the front of the gym. These alterations impeach the architectural integrity of the building.
Few structures in Lenapah could be compared to the scale of this gym. It is unique in type, art deco style, and workmanship. This project also provided work for destitute laborers in the area during the depth of the depression, and provided a place for recreational activities for students at the Lenapah School and the community.

I would love to know builders and other information. My grandfather supplied part of the stone. My father claimed that he along with others who were in school at the time helped.  My aunt graduated in 1938 and her class was first one to have graduation there.  I am interested to know the name of the stone mason(s) to tie back to the area history.  I am a Lenapah Historian and founded the Lenapah Historical Society Museum that is housed in that gym.
January 10, 1938 – Lenapah Gym to be used Friday night.  The new gymnasium and auditorium has not been completed, but the floor was being sanded Sunday, and it will be possible to play a basket ball game in the new building Friday night.  The bleachers which will seat about 500 spectators are up on each side of the playing surface.  The baskets are ready and the lighting system is installed.  There is considerable finishing to be done to be used as an auditorium, but Lenapah people are jubilant that the gym part has progressed far enough, the floor can be used for games.  The opening game will be with Delaware teams and the rivalry is keen.  The building should be crowded.  The exterior of the stone building is exceptionally fine work, and gives Lenapah one of the finest appearing structures in the country, and one of the best WPA buildings in the state.  (Nowata Star)
January 16, 1938 – The Delaware Warriors basketball team flashed a second half scoring spree that carried them to a 40-10 victory over Lenapah in the opening game of the new gymnasium at Lenapah.  The Lenapah girls split the twin bill with a win over Delaware 28 to 27.  The intense fight of the Lenapah quintet puzzled the Warriors for the first part of the game and it was not until the second half that they were able function with their usual mechanical smoothness.  Gay of Lenapah had sunk three difficult one-handed shots from near the sidelines for Lenapah’s only counters.  On Lenapah’s team were Gay, Jordan, Collins, Howell, Wyckoff, and Price.  (Nowata Star) 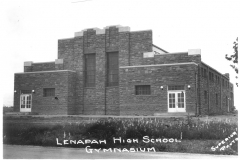