This remarkable WPA-built structure included a fence, a football field and stadium, and a baseball field and stadium. The stone fence surrounds both fields and is 257 feet long on one side. It is constructed of uncut, rusticated native stone of auburn and buff colors. The masonry of the fence is random rubble. Concrete seals the top and metal bars were added later to this concrete seal. The outside of the fence, near the baseball stadium, contains blind acades. There are two small ticket booths–one on the north wall and one on the east.
The baseball stadium grandstand is a wide, U-shaped (27′ x 177′) structure with dressing rooms underneath it. It is constructed of uncut and rusticated native stone in random rubble. On the outside of the curving part of the stands there are open arches, but they are closed off from the baseball field. Concrete has been used to make a unique zig-zag design on each end of the structure. A wire fence has been added to the grandstand, as well as a metal roof for shelter. This structure also has concrete seats and dugouts built on the lower level.
The football grandstand is constructed of uncut, rusticated rock of auburn and buff colors in random rubble. Dressing rooms are underground within the structure. It has concrete seats and “Pecan Bowl” engraved on concrete on the front of it. The structure is rectangular (27′ x 187′). A small portion of the stone fence to the south has fallen down and a metal fence is there now. A dressing room and concession stand have been added to the west wall and new stands were constructed on the east wall across from the WPA-built football grandstand, and are not a part of this nomination. The alterations on all three parts of the stadium do not impeach their integrity.
These fields and stadiums are significant because construction of them meant useful work for unskilled and unemployed laborers in the area. This project infused wages of some 21,000 man-hours of labor into Okemah’s economy. After completion, this WPA project provided a place for recreational activities that helped to raise morale in Okemah. During World War II the Pecan Bowl served as a P.O.W. camp for some German prisoners. Bars were added to the archways on the outside wall of the baseball grandstand and the dugouts of both grandstands, while the prisoners were kept in these areas and in tents out in the fields. These structures are now used again for recreational purposes. Additionally, the grandstands and the surrounding fence are very unique within this part of Oklahoma in terms of type, style, scale, materials, and workmanship. [1]

VERBAL BOUNDARY DESCRIPTION: All of Block 12, Dill Addition to the city of Okemah. 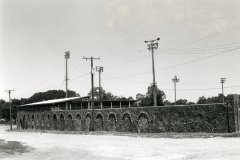 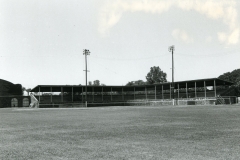 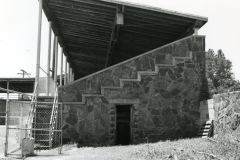 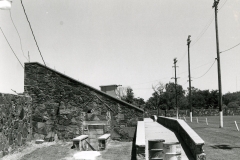 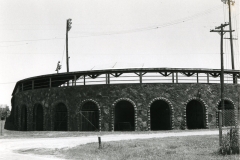 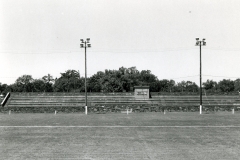