The Roff Armory is a single-story, rectangular (210′ x 127′) structure constructed of rusticated and randomly laid native stone. There is a sense of play in the superb rockwork with many different sizes of stone fitted together. The structure has a central drill floor with a high arched roof and rectangular shaped wings with flat roofs east and west of the drill floor. Parapets are capped with heavily rusticated stone. The main entryway is framed by pilasters and a stepped cornice at the roof line. The metal casement windows have concrete sills and are crowned by an inset of stone rising to the roof. The structure has nine arched garage doors. Pilasters and friezes provide decorative relief.

The Roff Armory is most notable for its architecture. Within the community the structure’s scale, materials and workmanship are unique. The style of the building is also unusual, particularly the effect achieved by the heavy rustication of the building stones and the capping of parapets with oversized stones–also heavily rusticated. The structure alludes to a medieval fortress more than most WPA-constructed armories. The building is also significant because it was completed in time to help prepare the Oklahoma National Guard to play an important role in World War II and the Korean War and because its construction provided jobs to destitute workers that had been left unemployed and on relief by the national depression.[1]

Architect was Bryan W. Nolen who served as a Major in the Oklahoma National Guard.[2]

Groundbreaking for the Roff Armory took place in the fall of 1935, and construction proceeded through the rest of the year, through 1936, and into 1937. Due to labor shortages, material shortages, and weather-related shutdowns, a short project expanded into a long one. Finally finished in March, 1937, the armory was dedicated on March 26, 1937. On that day, Roff celebrated with an open house and banquet. General Key, state WPA director, and other state and local dignitaries participated in the dedication, and the program concluded with a dance in the new armory.* WPA projects in 1935-1937 propped up the sagging economy of Pontotoc County. By May of 1936 alone, estimated WPA expenditures in Pontotoc County totalled more than $204,875 on projects ranging from farm-to-market roads to traffic lights and sewing rooms. Seventy-five percent of the expenditures went to labor alone. The WPA’s cost on the armory project was $79,838.20. A break down of the numbers show that $41,491.80 was spent for relief labor; $7,724.93 for non-relief labor; $21,985.43 for materials and supplies; $8,331.74 for equipment; and $324.26 for other expenses. An additional $4,994.80 was expended from sponsor contributions in the form of wages, materials and supplies, and equipment. All totaled the armory brought $84,853 into the economy of Roff. 9 In human terms, 136,328 manhours of labor went into the armory’s construction. These figures testify to the labor-intensive nature of WPA projects, which were designed to provide as much work as possible for those on relief rolls. Most of the hours were consumed in hand labor stone cutting, concrete-pouring, and installing the wood-block floor in the drill hall (pine blocks were cut, primed, set in asphalt, sanded, oiled, and polished, in sections). A concrete floor would have sufficed, but ample time and labor were available to create a more complex floor. 10 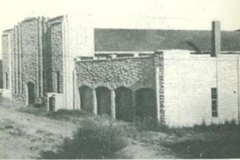 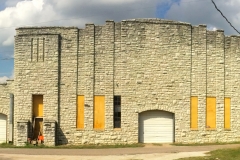 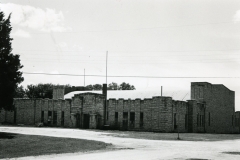 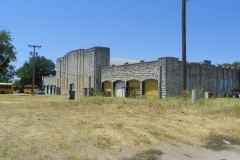 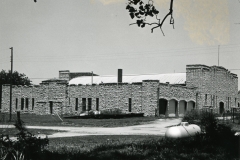