The Bluejacket campus contains two WPA constructed buildings (a third was destroyed during the 1985-86 school year). The main classroom building is is a rectangular shaped (I 70′ x 63′) structure constructed of crudely cut and slightly rusticated native stone randomly laid. The roof is flat and has parapets topped with concrete caps. The portion of the front facade upon which the main entry is found protrudes from the front of the building. The double-door entry is recessed within the protrusion and topped by a stepped cornice. The metal encased windows are grouped in pairs with concrete sills.
The second classroom building is situated southeast of the main building. It is rectangular (91′ x 56′) and constructed of uncut native stone randomly laid with extended mortar masonry. The flat roof has parapets with concrete caping. Two vestibule-like stone entries having double-doors and a concrete frieze over them are located on the front facade of the structure. The windows are metal encased and grouped into pairs. All windows have concrete sills. A small addition to the rear of the structure has not destroyed its integrity.
The construction on the Bluejacket campus constituted a tremendous community resource. Some 85,000 manhours of labor went into the construction of these buildings as well as others recently destroyed. The wages earned by the laborers were infused back into the local economy thus stimulating economic growth and easing the problems generated by the limited money supply. For many of the men these wages were the only means by which they could feed their families. Architecturally the buildings are significant for their fine workmanship and large scale.[1] 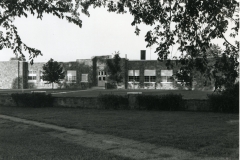 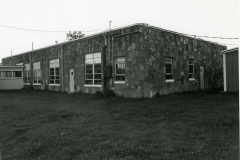 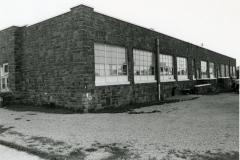 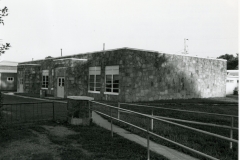 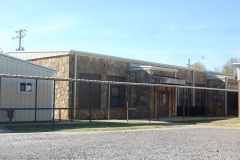