This essentially rectangular (120’x 140′) building is constructed of red brick laid with a running bond. Over the central drill floor unit the roof is arched, while elsewhere it is flat. Both segments have parapets. The main double door entry is recessed in an archway and framed by pilasters that extend above the roofline which are joined by a stepped cornice. The pilasters, cornice and side walls into the entrance are capped with rusticated native stone of buff color. The use of native stone is a motif also used on corner pilasters and at the roof line, the latter lending a crennelation affect. There is also decorative brickwork above the windows. There are four vehicle entryways on the west side, one of which has been enclosed with bricks. Elongated window openings, with a cut stone sill, have also been enclosed with red brick or cinder blocks. Unfortunately, the window and door alterations have impeached the integrity of the structure.
This building is situated in the heart of the city of Boynton, which is a predominantly black community. It allowed this community to participate in Oklahoma’s military preparedness during World War II. Architecturally, the armory is unique in terms of materials in that brick WPA structures are unusual in northeastern Oklahoma. Moreover, nothing in Boynton compares to the structure in terms of scale. This WPA project also gave work to those desperately in need of it and infused wages from almost 75,000 man-hours of labor into Boynton’s economy.[1]

VERBAL BOUNDARY DESCRIPTION: Lots 1 through 5 and Lots 13 through 16, Boynton Original. 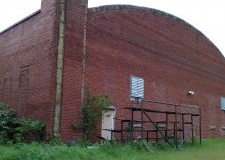 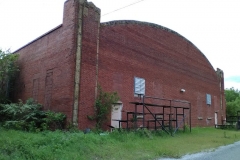 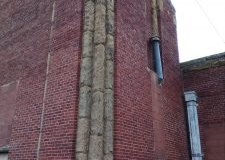 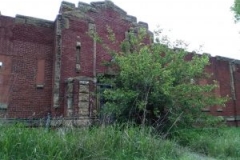 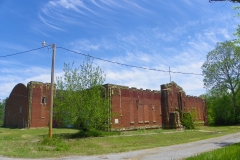