This rectangular (85′ x 170′) structure of approximately eight rooms is constructed of uncut native stone of buff colors in a masonry of random rubble. The roof of the school is flat with parapets, while the gym’s roof is arched. The two-door entryway contains a square arch and cut limestone pilasters on each side that extend beyond the roof. The windows are placed singly and in threes and have brick sills; some have been filled with brick. New energy­efficient windows were later added, the structure has been painted yellow, and several additions of metal and cinder block have been attached to the building. The alterations do not impeach the integrity of the structure.
This school/gymnasium is significant because it constituted an economically important community resource. Its construction provided wages for some 61,000 man-hours of labor for local families which were infused back into the depressed local economy and helped to soften the blow for mainstreet. Jobs generated by the construction of the school restored a sense of pride to many men who might otherwise have been unable to provide for their families. The educational significance of the school is apparent in that it has served for almost fifty years as an educational facility for children of the community. Architecturally, the structure is an excellent example of vernacular styles that symbolize a major historical epoch.[1]

VERBAL BOUNDARY DESCRIPTION: The building is situated on the northeast edge of Braggs, specifically in the NW corner of the NW 1/4 of Sec. 28, T 14 N, R 20 E. 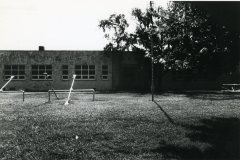 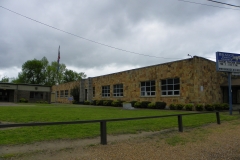