The Connor’s State College Administrative Building is a single story, rectangular (45′ x 116′) structure constructed of cut and rusticated native sand stone randomly laid. The roof is hipped, with an intersecting central gable that is supported by an extended portion of the front facade. In this facade the principal single door entry is recessed behind an archway. There are other recessed entries at either end. Double hung wood sash windows are singly placed, resting on cut stone sills. Placing a sliding glass doorway on the north end has not impaired the integrity of this structure.
The Conner’s State College Administrative Building is a major cultural resource for the Warner community. Its construction poured wages from more than 46,000 man-hours of labor into the local economy, helping mainstreet to withstand some of the ill effects of the depression. Construction also meant jobs to individuals who were on relief rolls and enabled them to provide for their own families. The structure is an exellent example of vernacular architecture, notable also for its remarkable workmanship. 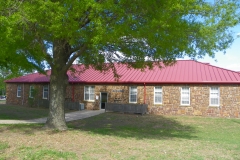 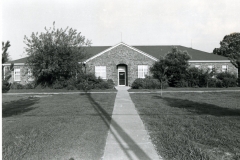 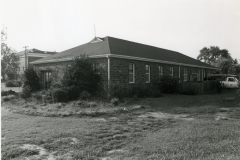