This distinctive stone stadium was built by the WPA in 1939. A 1999 document from the Cherokee Strip Museum describes the stadium’s origins:

“This year we are celebrating the 60″ anniversary of Perry Stadium, the home of Daniels Field. Men of the federal Works Project Administration (WPA) at an estimated cost of $100,000 built the sandstone structure in 1939. To those too young to remember, the WPA was an agency conceived by President Franklin D. Roosevelt to help overcome the Great Depression. Originally the stadium included a baseball field as well as the football gridiron, but old age caught up with the Baseball Park years ago when some of the walls began crumbling, and that part of the stadium was converted to a football practice field.”   (http://www.cherokee-strip-museum.org)[1]

The Daniel’s Athletic Fields and Stadiums consists of football and baseball fields and a track as well as three grandstands. On either side of the football field and track, the east and west grandstands with a dressing room on each of the south ends measure 280 feet long. Behind the baseball field, the south stands is circular and measures 110 feet. It is linked to the west stadium by a ten foot high fence. The three grandstands and the fence are constructed of colorful, rusticated and coursed native stone. The entry into the west stands is particularly imposing, consisting as it does of a false arcade beneath a stepped cornice on the rear wall of the stadium, rounded corners, vertical insets, and an hexagonalk ticket booth covered with a concrete roof. Ramps rise to entries at the top of the stadium, hidden from view by walls of stone. Athough less decorative, a similar entry exists for the south stands. In the latter the wood tops of bleacher-like seats have been removed, giving the baseball stadium the appearance of the Roman Colosium. Aside from some minor additions of a pressbox and replacement of a section of the rear wall on the west stands with wood siding, the Daniel facility retains its essential integrity.
The Daniel’s Athletic fields and Stadiums constitute an exceptionally remarkable example of WPA recreational architecture. The use of heavily rusticated cut native stone as constructive material and details such as an arcade gives the facility a unique and distinctly Romanesque style. Despite use of unskilled workers, the masonry is particularly good. To include a baseball field and stadium with a track and football field make it unusual as well. Certainly there is nothing like it nor as recreationally comprehnsive in the northwestern Oklahoma counties. The Daniel facility was exceptionally significant in its impact upon the social and economic life of the Perry community. To gather together for athletic contests following its completion improved morale, despite the destitution of the depression years. Construction also infused wages from some 74,000 man-hours of labor into the economic life of the town, helping to revitalize business activity along mainstreet. The economic impact upon the jobless workers who found employment with the project were aided even more materially. And the athletic fields and stadiums have been of long-lasting benefit to the community in that they have been heavily utilized for nearly a half century.[2] 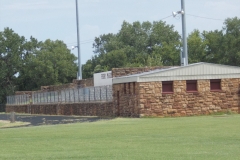 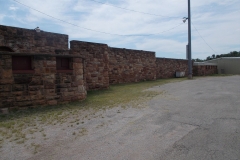 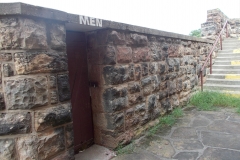 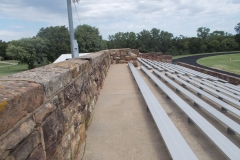 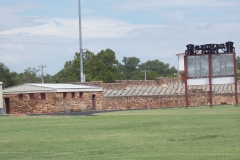 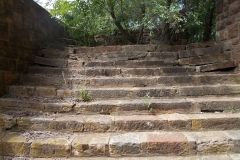 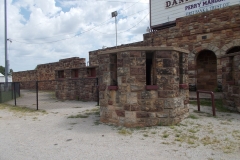 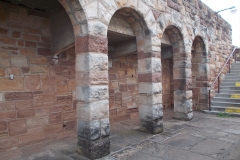 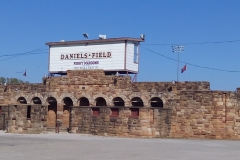 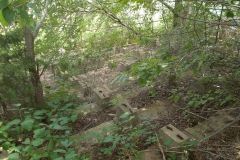 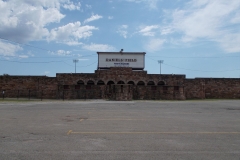 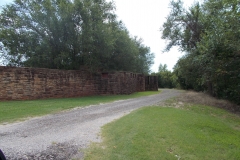 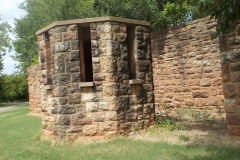 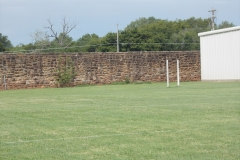 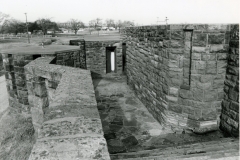 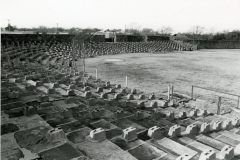 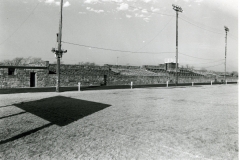 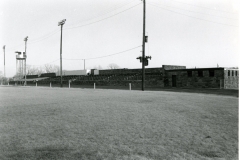 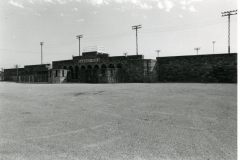