This armory is a single-story, rectangular (96′ x 142′) structure constructed of coursed and rusticated native stone of buff color. The drill floor unit has a high ceiling with an arched roof that contains parapets, while the office and garage segment was a flat roof with parapets. The main entrance is framed by pilasters that extend beyond the roof line to form a cornice. Some of the elongated and metal encased windows are painted white and others have plastic covers. The alterations do not impeach the integrity of the building.
This armory is notable for its quality of workmanship and scale. It is also unique within Eufaula in terms of type, style, and materials used. Construction of the armory provided jobs for unskilled and unemployed workers who desperately needed some economic security. Indeed, the WPA infused wages of some 48,200 man-hours of labor into the local economy. It is also significant that the building contributed to the military readiness of a National Guard unit that distinguished itself during World War II.[1]

Construction of a new armory provided a major economic and social benefit for Eufaula. Founded as a railroad market town in 1874, Eufaula replaced the much older Creek Indian community of North Fork Town. North Fork Town, located one mile east, was one of the most prominent places in nineteenth-century Indian Territory. Oklahoma statehood in 1907, however, transformed the predominantly Native American town of Eufaula into a bustling, Euro-American county seat serving an agricultural hinterland. A decline in commodity prices in the 1920s hurt local cotton and corn farmers. The 1930s added the ills of a national economic depression and severe drought. Although in 1935, corn crops improved from 10 percent to 62 percent of normal and cotton production rose from 42 percent to 64 percent, many Mclntosh County residents were in distress. In June 1935, 2,306 heads of families or single people, representing 39 percent of the county population, were on relief rolls, compared to the state average of 33 percent. Construction of an armory would ease hardship by providing employment as well as provide Eufaula with a substantial public building. Civic leaders in the Lion’s and Commercial clubs quickly chose the Crabtree property east of the City Hall as their armory site, sent Guard Captains Charles R. Aingell and Harry B. Parris to the State Capitol to coordinate construction efforts, and raised $2,190 for the project through city funds and public subscriptions, thus meeting the WPA requirement of local sponsorship. Quarrying of stone for  the Eufaula Armory and other local WPA projects a swimming pool, two tennis courts, and cemetery improvements began in the fall of 1935. Twelve men were requisitioned for the armory project on October 30 and actual construction began November 4. Cancellation of the project a few days later because of federal-state administrative friction over funding caused shock and outrage. Indignant protests by Congressman Jack Nichols and State Legislator (and Guard Lieutenant) Joe Whitaker, both Eufaula residents, helped win reinstatement of the state-wide armory building project. By November 21 construction on the Eufaula Armory resumed with an average of 58 men employed through the first half of 1936. Unskilled laborers from the relief rolls were limited to 130 hours’ work per month but were guaranteed a wage of $23 a month, a boost both to their spending power and their self-respect as bread-winners. In the summer of 1936, with the stonework finished and only about a month’s work remaining to erect the steel roof framing and pour the concrete floors,construction halted again. This second work stoppage is probably  due to a lack of skilled labor for specialized tasks, a reoccurring problem.  Unprecedented devastation of the state’s corn, cotton, and feed crops by drought and grasshoppers presumably caused resumption of construction in September as a relief effort. The skilled labor shortage having been overcome by October, two shifts of 24 men worked to complete the building as the projected cost of $33,000 rose to approximately $50,000. Work was still underway in January 1937 when the accumulated weight of snow and ice caused the collapse of a nearby building used to store concrete for the armory project. One worker was killed in the accident and another injured. Despite these incidents the work was complete by early spring. This includes cutting, sanding, varnishing, and laying hundreds of thousands of four-inch wood blocks in the drill hall floor and placing over the entrance a particularly fine bas-relief carving of an American eagle, produced by Eufaula resident Jim Price. An estimated seven thousand people attended the dedication of the Eufaula Armory on April 7, 1937 by State Director General W. S. Key. The largest celebration in Eufaula since World War I, it was an affirmation of community support for the WPA and the local Oklahoma National Guard unit. Presented to the Guard was a substantial building approximately 120 f by 140′. Special features were the administrative offices, classrooms, a “bomb-proof” arms vault, four-truck garage, storage room, locker room, and showers. The 110′  by 86′ drill hall with its 13′ by 130′ below ground rifle range guaranteed the unit adequate space in which to train. The stage and dressing rooms at the west end of the drill hall as well as the juxtaposition of the building to the City Hall and central business district demonstrated the dual role of the armory as a community center. The Oklahoma National Guard unit that received the Eufaula Armory as its headquarters was an integral part of the Eufaula community. Founded with 77 members in January 1924 as Company H, 2nd Battalion, 180th Infantry, by Captain Charles R. Aingell, the unit dated from shortly after the reorganization of the Oklahoma National Guard into the 45th Infantry Division.[2] 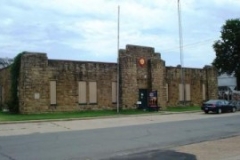 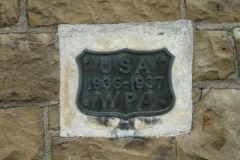 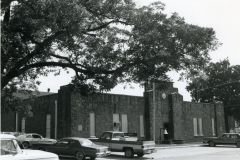 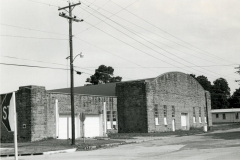