“This WPA-constructed building stands at 500 E. Choctaw, just east of Hwy. 81 in historic Chickasha, which is located on what was once the famous Chisholm Trail. This is a large one and two-story native sandstone building built in 1940, which contains 25,000 square feet (100 x 125 ft). This building was built with a WPA appropriation of $73,439. Known originally as the Administration building, it is now referred to as the North Exhibit building. The building underwent a major renovation in 2000. Large, open courtyards, originally built to offer more light through exterior windows, were enclosed under the building’s roof. The original exterior stone walls were retained. Photos in the gallery show the building before renovation, as well as an aerial photo showing the open courtyards.

The native stone walls on the facade are curved and inset with glass blocks. The two-story entrance has double doors and a covered portico. The high walls have narrow, arched glass-block insets, with semi-circular glass insets on the upper wall. Stucco and metal siding have been added in places on the upper wall. The building contains a very large open event hall, which can seat 800, or serve a banquet for 500. A fully-equipped commercial kitchen is located off the auditorium.

During World War II, this building was used as a POW camp for German prisoners. Stories are told that the prisoners enjoyed the Oklahoma countryside and the people. Some said it was the best time of their life. They worked in the local fields, planting and harvesting, and after the War, some returned to make Chickasha their home.

This building is listed on the Oklahoma Landmarks Inventory database.”   (waymarking.com) 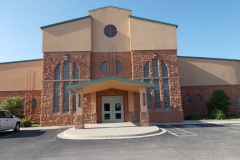 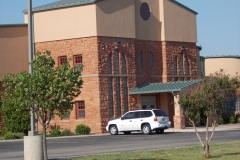 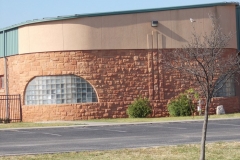 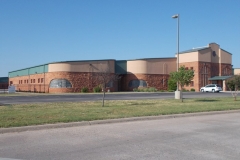 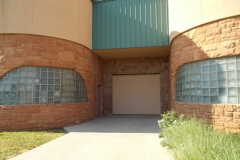