The Indianola school campus includes two WPA structures: One classroom building of four rooms and another classroom building of six rooms. The classroom building of four rooms is a single story, rectangular (54′ x 79′) structure constructed of rusticated and coursed native sandstone. The roof, with composition shingles, is gabled, with an intersecting frontal gable covering an entry once recessed behind archways. Sadly, the arch has been enclosed with buff colored bricks. End doorways are also recessed behind arches, and classroom windows, now metal sash, reach to the eaves. To the south end of the building is attached a concrete block extension that connects it to the second WPA building. The alterations, however, have not impeached the integrity of the structure.
The six room building is a single story, T-shaped (100′ by 54′ vertically; 30′ x 85′ horizontally) structure constructed of beautifully rusticated and coursed native sandstone. The roof is flat with parapets. Entryways are recessed behind arches; windows on concrete sills are placed by fours and sixes. This building has a distinct art deco flavor, and its architectural integrity is not impeached by a concrete block extension that connects it with its sister WP A building on the north.
SIGNIFICANCE: 1936-37, 1939-40; builder/architect: in part Okla. State Dept. of Education pattern book
As rural WPA buildings, those on the Indianola campus are notable for their scale, number and style. They also reflect the improvement over time of the skills of WPA workmen; the four room building is earlier in construction date and less sophisticated in masonry and design than the six room building. Within the community the structures are also unique architecturally because of their type, style, scale, materials and workmanship. The two buildings are significant because construction of them provided work opportunities for destitute laborers who had lived with the spectre of starvation for more than a year. The influence of the structures upon the educational life of the community is also important, the best measurement of which is that they are still used by the school district. 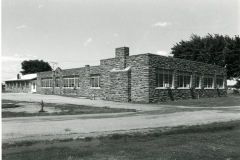 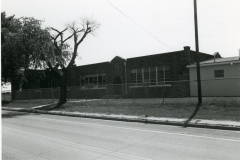