This “L” shaped (131′ x 98′) structure, originally built as an agricultural building, is constructed of uncut and randomly laid native stone. The roof is flat except for the east part of the building where it is gabled. Single door entries are found on the front facade of the structure along with garage door entries. Large fixed windows are located in the front of the structure. Additional garage door entries with concrete lintels are found elsewhere on the structure. Additions on two sides of the building have impaired its original architectural integrity.
This structure is significant because it provided a multiple use community facility for the city of Jay, first as an agricultural market center and then as a seat of city government. Its construction provided employment for destitute farmers and helped preserve their sense of pride by allowing them to feed their families. Construction of the structure also brought needed money, wages for some 17,000 man-hours of labor, into the community helping to ease the burdens of the limited money supply.[1]

VERBAL BOUNDARY DESCRIPTION: The west 120 feet of Lots 1 and 2 of Block “S” of Addition “A” to the town of Jay, Oklahoma, according to the recorded plat thereof 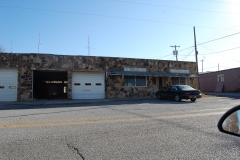