The old campus of Jay Highschool contains at least four WPA structures, only two of which retain their architectural integrity. One of these is a Vocational Education Shop Building. It is a rectangular (63′ x 29′) structure constructed of cut, rusticated and coursd native sandstone. The roof is gabled with eaves and with wood siding in the eaves. Single door entries are on either side of the building; these utilize cut stone lintels. A garage door provides access to the building from the west. A band of fixed nine panel, one half windows with a cut stone sill on the south wall and two other bands of nine above and below wood sash windows with cut stone sills provide light for the building.
A Home Economics Building is a second WPA structure. It is rectangular (58′ x 39′) structure constructed from uncut stone native sandstone randomly laid. The roof is gabled. The front entry on the south end is symetrically placed between four single, wood sash windows. On the sides windows reach to the eaves and rest on cut stone sills, as do windows on the front and back.
A second vocational education building and a gymnasium are the two other WPA buildings on the Jay High School old campus. These, however, have been substantively altered architecturally.
The Jay campus is notable for the extensive number of WPA buildings it features. Construction of them had a major economic impact upon the community at a critical time during its development: the 1930s. When the relief rolls were extended and the unemployed were numerous, the WPA building program on the Jay campus offered job opportunities to destitute agriculturalists and infused wages from tens of thousands of man-hours of labor into the local economy. The structures remain remarkable symbols to an enlightened social program.[1] 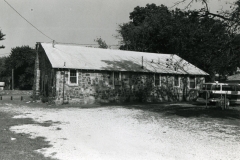 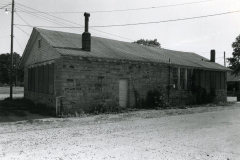 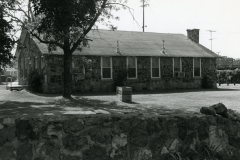 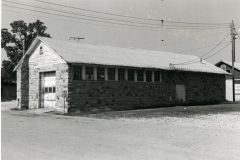