The Morrison School Gymnasium/Auditorium is a single-story, rectangular (78′ x 59′) structure constructed of rusticated and cut native stone laid in a random ashler pattern. The metal roof is flat with parapet. Metal frame windows are single spaced. No original entrances remain due to the attachment of additions to the west, south, and east sides. The gymnasium/auditorium retains much of its architectural integrity.
Significantly, construction of the Morrison Gymnasium/Auditorium demonstrated the involvement of the WPA in the development of educational and recreational facilities. The project created jobs for unemployed laborers in the area during the Depression as well as nurturing a sense of civic pride and providing space for community activities. As a WPA building, the structure is notable for its scale, type, and materials.[1]

VERBAL BOUNDARY DESCRIPTION: All of Block “A”, Morrison original.

This school gymnasium was constructed in the 1930’s by the WPA. No original entrances remain due to the construction of additions on the West, South and East of the building.

The gym is a one-story, rectangular building, 78 x 59 feet. It is built of rusticated and cut Native Sandstone laid in a ransom Ashlar pattern. The north wall is still visible, and shows a row of multiple-pane fixed windows on the upper wall. The original canted entrance on the southwest corner has been sealed, and the window above the previous entrance has been covered with metal siding. The original flat roof now has a low sloping gable metal roof.

The gym is part of Morrison High School and is still being used today.[2] 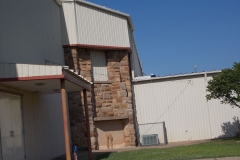 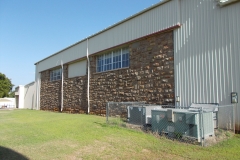