The Muskogee High School Athletic Field and Stadiums consists of a football field, a track and two grandstands. The football field and the track are identifiable by definition, but the grandstands are rectangular. The west stands extends 286 feet, while the east stands extends 178 feet. Both are constructed from poured concrete which fashions a superstructure and risers. Each stands rises 25 tiers, the interiors of which are accessed via two “tunnels” and walkways at either end. Beneath the stands the superstructure was exposed, although portions betwen the “tunnels” were enclosed with tile blocks to form concession outlets. To the rear of each stands are two ticket booths constructed of poured concrete, even the curved and incised roofs. The exposed superstructure of the west stands has been partially enclosed to form rooms suitable for storage, training, and toliets. These and the addition of a press box atop the west stands have not impeached the integrity of the structures.
The Muskogee High School Athletic Field and Grandstands were quickly dubbed the “Indian Bowl.” The name came from the fact that Muskogee set in the center of a large concentration of Native Americans and the facility itself was impressive enough to be a “bowl.” The community put the complex to immediate use, and the highschool became one of, if not “the” football power in the state of Oklahoma. Graduates of the team went on to the University of Oklahoma where they contributed to a establishing a football powerhouse second to none. If nothing else, the Indian Bowl is significant because it as much as anything else was responsible for the football tradition in Oklahoma. Of course, construction of it put destitute and unemployed laborers to work during the depths of the depression, activity that also infused into the Muskogee mainstreet wages for some 50,000 man-hours of labor. Architecturally, the Indian Bowl constituted the largest football complex built in Oklahoma.[1]

“The stadium in Muskogee is called the Indian Bowl, and is made of white concrete. No WPA marker is visible, but the stadium is on the list of WPA properties. It was constructed with WPA funds and was eligible to be on the National Register. The adjacent Alice Robertson School is made from buff-colored brick.”[2] 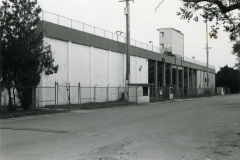