The Kingfisher Armory is a two-story red brick building, located at 301 N. 6th Street. It has cast concrete decorative accents on the window sills, and on the brick pilasters flanking the entrances and at the building corners. Cast concrete is also used to form arches over the pedestrian and vehicle entrances. There are four overhead vehicle doors on the west-facing facade and one on the south. The windows throughout are tall, narrow one-over-one. The pedestrian entrances are located in slightly projecting bays, with stepped parapets at the roof line. The building was a WPA project in 1936.
The building is rectangular, with two distinct sections. The east or rear section has a barrel roof and enclosed the drill floor. The west half has a flat roof and contained the offices, supply area and garages. In 1991, all doors were updated from wood to metal.

The armory appears to be vacant, although there is a sign over the main entrance “Crescent Hill” that appears a church meets here on occasion. The armory was placed on the National Register in April 7, 1994.

Kingfisher’s city council submitted its bid for a new armory in August of 1935. WPA officials approved the projects, and blueprints arrived in Kingfisher in September. The city provided a vacant site (six city lots) at the northeast corner of 6th and Admire, where sales had been held on weekends. Red tape in Washington, D.C. delayed the project for several months, but finally on January 23, 1936, twenty WPA workers began clearing ground. The project’s supervisors estimated that it would employ twenty to forty-four men on one eight-hour shift for six months, but in true WPA fashion, a short project expanded into a long one. By April, supervisors decided to work two six-hour shifts, each requiring forty men, in order to provide more employment opportunity and in order to finish the project by July 1. The exterior was completed in the summer, but interior work continued through October 29, the day of dedication. The two Guard units actually moved into the building on October 15, two weeks before it was completed. A dedicatory celebration was held on October 29, 1936, with General Key, state WPA director, and other state and local dignitaries participating, and the daylong program concluded with a dance in the new armory.

WPA projects in 1935-1937 propped up the sagging rural economy of Kingfisher County. The WPA’s cost on the armory project was $34,000 (with the city contributing only the land and the cost of hooking up electrical, sewer, and water connections). The federal government invested more in the armory than in any other building project in the county. In human terms, thousands of person-hours of labor went into the armory’s construction. Most significantly, a monthly average of forty-four men were employed on the project, a number that grew to eighty as the building neared completion. These figures testify to the labor intensive nature of WPA projects, which were designed to provide as much work as possible for those on relief rolls. Most of the hours were consumed in hand labor in laying brick, pouring and finishing concrete for the foundation, window sills, and decorative detailing, for the roof of the one story section, and in installing a maple-block floor in the 86′ by 125′ drill hall (more than 100,000 maple blocks were cut, primed, set in asphalt, sanded, oiled, and polished). A concrete floor would have sufficed, but ample time and labor allowed for a complicated design. 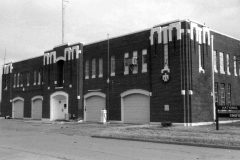 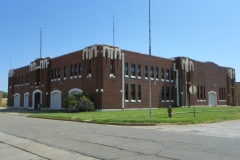