The 72,667-square-foot building was built in 1935 and doubled as a community center that hosted civic gatherings, roller derby, wrestling matches, square dancing, basketball and concerts. Architect and Oklahoma Army National Guard Maj. Bryan Nolen designed the building, which at the time was promoted as the only armory in the state funded entirely from oil revenues generated by wells at the state Capitol.

Unlike so many of the native sandstone armories, this one is constructed of light colored brick. Its Art Deco features are classic. A two-story office area projects from the north and west of the main drill hall. The windows have six-over-six double-hung sashes. A panel of vertically set bricks decorates the area between all the first and second story windows. The main entrance on the north has a two-story projected bay with two glass entry doors. Above these doors is a panel of nine windows. Six of these are fixed nine-light windows, with the upper three being double-hung. A double-sided cornerstone on the northeast corner of the building shows the construction date of 1938. Large red letters on the north upper walls read: OKLAHOMA NATIONAL GUARD ARMORY.

A large open drill hall covers the bulk of the rectangular building, with a row of overhead vehicle doors on the east. In days past, these huge drill halls were often used by the community for concerts, social gatherings and exhibits. This armory was originally on the BRAC list for closings, but was removed from the last and has remained open. It is currently used as a Recruiting and Retention office of the National Guard, and occasionally is the venue for community activities.”   (www.waymarking.com) 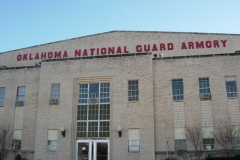 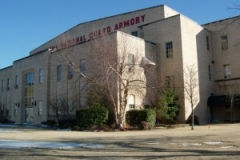 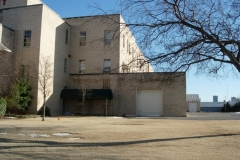