The Red Rock School is a single-story, multi-roomed, rectangular (200′ x 65′) structure constructed of rusticated and coursed native stone and buff colored bricks laid with a running bond. The roof is flat with parapets capped with concrete blocks. The east entrance is recessed and framed by pilasters that extend above the roof line and by a rounded concrete awning. Fixed metal windows with continuous concrete lintels and sills are spaced in groups of four on the front and back. The use of brick between window openings, above the lintels and on the corners of the building provide a unique decorative effect.
The Red Rock community has a large Native American population. This group suffered economically from the depression of the 1930s even more acutely than did the non-Indian population and was relatively disadvantaged educationally. The WPA constructed school building was exceptionally significant for the bi-cultural community. It was the genesis of a modern educational program, and its construction provided jobs for destitute agricultural workers, many of whom were Indians, whose families faced the spectre of starvation. Moreover, it infused wages from some 34,000 man-hours of labor into the local economy, a sum that eased the economic difficulties of the local merchants. Architecturally, the school was notable because of its blend of construction materials (rock and brick), a feature that seldom appears in WPA structures. Locally the building was unique in terms of its type (school) and its faint allusion to art deco style. Its use until just recently as an educational facility reflects its long-range impact upon Red Rock. 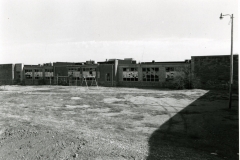 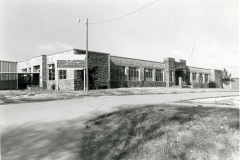