A two story, T-shaped structure (234′ x 103′ horizontally, with a vertical extension of 225′ x 180′), the Tulsa Armory is constructed of rusticated and coursed native sandstone. With the exception of the central drill area where the ceiling reaches to a third story level, the roof is flat with parapets. Over the drill area it is arched, but also with parapets. Resting on pre­formed concrete sills, the windows are metal casement. At either corner of the front facade, entryways are slightly recessed, the walls being stepped into the plane of the door. Elongated windows and sill extensions give visual relief to the massivemess of the facade. At the rear of the building and along its sides, some 10 garage doors provide entry for military vehicles.
The significance of the Tulsa Armory stems from its date of construction and its enormous size, among other things. Tulsa was not among those scheduled for an armory in 1936, in part because the WPA supported other projects and in part because Tulsa was strongly Republican in politics and armory selection was controlled by Democratic officials in Oklahoma City. The clear need for job opportunities for Tulsa’s umemployed and the willingness of Tulsa County to lease land at no cost to the state as a site for the armory cleared the way for the construction of the project. Construction poured into the local business economy wages from more than 250,000 man-hours of labor. But the construction of the armory was late and it was on land not owned by the state, a most unique situation. Architecturally, the Tulsa is notable for its size, one of the two largest in the state–and thus one of the two largest WPA construction projects in Oklahoma. It is significant militarily in that the Armory provided a most timely place where units of the 45th Infantry Division could train before shipping out for North Africa and Italy early in World War II. The relationship between training facilities and the success of the division during the war is obvious. 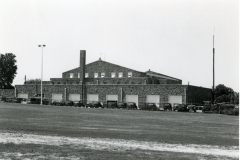 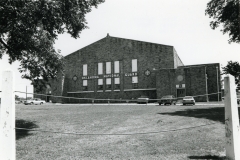