A single story, essentially rectangular (14-0′ x 80′) building, the Fairgrounds Cafeteria was constructed of red brick laid with running bond. The rounded extensions of the building on either side requ!red skilled masonry work, suggested also by the frieze above the window line. The roof is flat with parapets, and the windows are of the metal casement variety. Sills and wall caps are of pre-formed concrete, as are the letters above the front entry spelling out “C­A-F-E”. The latter, the casement windows and the rounded side wings give the structure a distinct art deco flavor. An enclosed walkway connecting the front door of the cafeteria with another building and an enlargement of the cafeteria by adding a brick addition to its rear have not impeached the integrity of the structure.
The annual Tulsa fair was one of Oklahoma’s two largest fairs. On the grounds of the fair was also held the world famous Oil Exposition. The construction of the cafeteria by the WPA was intended to better serve the needs of the crowds attending these events. Other improvements were also undertaken by the WPA at the fairgrounds, but the cafeteria alone remains to reflect the contribution of the agency. Architecturally, the distinct art deco style is uncommon for WPA structures, while a cafeteria-type of facility is entirely unique. The building, also, reflects the broad definition of “useful” employed by WPA officials. Given the context of the construction program, the cafeteria is also significant because of the job opportunities it gave to persons whose economic fortunes had been devastated by the national depression. 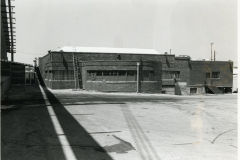