Situated on the south side of the athletic field, the Webster High School Stadium is rectangular (240′ x 34′) in size and was constructed with a poured concrete superstructure enclosed with red brick. The stands rise sixteen tiers. The enclosed area beneath the stands has metal casement windows, three garage doors, and seven single door entries. A press box constructed above the stands does not affect the architectural integrity of the structure. A new stands on the north side of the field is not a part of this nomination.
Tulsa west of the Arkansas Riveer is a community primarily of blue collar workers. To provide this area with its own high school was one of the principal objectives of Tulsa officials when the federal government sponsored construction program began in the 1930s. The result was an entire campus constructed by depression agencies. The principal building, a massive two story brick structure, was designed by John Duncan Forsythe and funded by the Public Works Administraion (FERA). The gymnasium, built at the same time, apparently was also PW A. The contribution of the WPA was on a lesser scale, the stadium and athletic field, but it rounded out Tulsa’s only “federally built” high school campus.
The stadium and field are also significant in that they reflect the broad definition of “useful” employed by the agency in selecting projects. Moreover, the field became a source of pride for Webster students, a pride that translated into remarkable victories on the football field and sustains the community despite its blue collar character. Architecturally, it is unique in that it is one of, if not the largest, stadium built by the WPA in Oklahoma 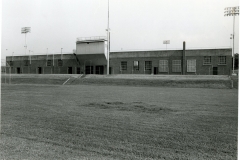 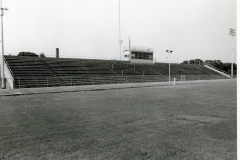