Opened in September of 1940 as Alice Robertson High School. Named after Alice Robertson, pioneer educator and civic leader in Oklahoma, she was a descendant of the missionaries to the Cherokee and Creek Indians in Indian Territory.  It currently is used as a Junior High School.

“Muskogee’s Alice Robertson School, now a 7th and 8th grade center, and the adjacent stadium, Indian Bowl, used WPA labor. The plaque in the school lobby indicates Federal Works Agency is credited with the job, as the project was completed after the reorganization requiring that label. Many communities wanted to avoid using the letters WPA, because of the stigma of using ‘relief’ labor. That did not appear to be true in Muskogee, which had many WPA projects. Federal Works Agency was a proper term, but many schools finished during that time used the common shield with the date and WPA, and no mention of FWA. No federal guideline indicated that a WPA shield be used on a building or stadium wall.”[1] 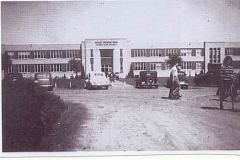