In 1940, the WPA approved a budget of $48,367 for Bradley to build a new one-story school with ten class rooms, an auditorium-gymnasium with dressing rooms, and offices. It was built with rough hewn sandstone blocks from the Wichita Mountains near Medicine Park. The men of the community, J.C. Hampton among them, drove flatbed trucks to Medicine Park and hauled the large rock to Alex where it was shaped and then transported to Bradley. The school was literally built by the hands of our grandparents and great-grandparents. It now qualifies as a historic landmark because of these stones. The school met all the requirements of a four year credited high school. Classes 1-12 were held at the school until Bradley lost its high school in 1968 due to cuts in funding and low attendance. The school continued to operate through the 8th grade until it was annexed by the Town of Alex on May 11, 1990. Alex built a new cafeteria onto the school and taught Head Start there. Classes were discontinued in 1997 and Alex offered to give the building back to the town for the sum of $1. The town voted to accept the school, but the chairman went against the town’s wishes and would not accept the school because Alex refused to include the mineral rights with the transaction. The chairman was under the impression that the town could not afford to pay the insurance and maintenance on the school without revenue from the mineral rights. A proposal was made to declare the school as a historic landmark to qualify for a historic preservation grant, but the chairman refused the offer because he did not wish to deal with a grant. This Chairman resigned on October 22, 2004 after a petition was circulated demanding his resignation. Later that year, the school’s former janitor circulated a petition to save the school, then purchased it from the City of Alex for the sum of $525. He then distributed all the trophies to various unknown alumni, gave away the old sport uniforms and stripped the building of all its appliances. Afterward, he sold the building to an unknown individual who we were told was a wine and spice manufacturer for the sum of $50,000 because the Alumni Association made him mad. The building is currently owned by a Blanchard attorney. On October 31, 2010, the school was burned down by an arsonist. An Alex firefighter removed the WPA sign from the building. The destruction was so massive, it looked as though a bomb had been dropped on it. We lost our precious school and all we have to show for it are the graduation photos in the Community Building that lined the hallway. Everything else is gone. All that remains is charred stone and burned rubble. We were the Bradley Dragons; our colors were blue and gold, and the school’s mascot was a blue and gold celtic dragon. It was drawn in the 1930s by Leroy Guest. We had a top-ranking basketball team and a track & field team. The high school also wrote the Bradley Dragon Newsletter, the front cover of which was drawn and colored by the younger children. This website’s layout is blue and gold in remembrance of our school. 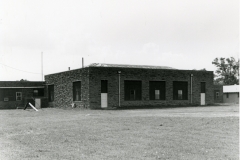 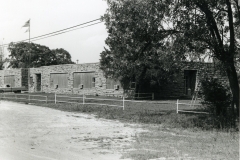