Constructed in 1936 for the 179th Infantry Regiment, 45th Infantry Division of the Oklahoma National Guard. During it’s history it has served many purposes such as National Guard Armory, roller skating rink, community center, all sports offices, Parks and Recreation City Offices, meeting hall, and home to local arts programs, now it is the offices of the Historical Society and Museum for Edmond. It has undergone many alternations to it’s original interior to accommodate those purposes, but these changes have not compromised the historic and architectural integrity of the outside of the building. The original architect was Colonel Bryan W. Nolan, the work was begun in November 1935 and completed in 1936 at a cost of $39,501. The armory was originally constructed for military purposes to include arms storage and staging. Located at the corner of 5th and Boulevard, it follows a 1930s public building with depression style “modern” architecture using native red sandstone similar to the 1890s University of Center Oklahoma School Building. It originally featured a large vaulted ceiling drill hall, a target range, offices, barracks, arms storage, stage, and garage.[1]

On June 20, 1935, The Edmond Sun announced that the city had been chosen as a possible location for one of these armories. According to the paper, the “new armories would serve as community centers, replace old and inadequate structures now being used in many places by the guard, create work for thousands of unemployed laborers, and serve as a permanent improvement for each city in which they are constructed.” By September 10, 1935, the city council had been notified that the city, acting as the sponsor, was assured of being awarded an armory. The council chose a site in the southeast corner of Stephenson Park for the armory’s location. Construction on the building began in November 1935 and proceeded at a slow pace due to the nature of the stonework. Although the cornerstone was cast in 1936, the available evidence suggests that the building was completed in 1937. As a WPA project, the construction of the armory provided a much needed influx of money into Edmond f s economy. A contemporary newspaper account reported that in Edmond alone, the average monthly WPA payroll was $3,500. 4 The armory project was not the only WPA project in Edmond but it was one of the largest. Reports of the cost of the building ranged from $32,000 to $40,000.  Working off of an estimate of $32,624, the Edmond Booster reported that approximately $15,000 would be spent locally for materials and approximately $11,500 for local labor. Less than $6,000 would be spent outside for materials. 5 This expenditure of money would not only have helped individual families but would have been of benefit to local merchants and material suppliers.
The Edmond Armory served as the home of a local unit of the Oklahoma
National Guard the Headquarters Company of the 179th Infantry Unit of the 45th Infantry Division.[2]

The building was listed in 1991 on the National Register of Historic sites. 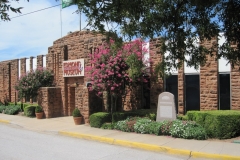 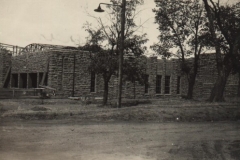 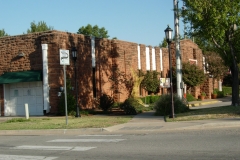 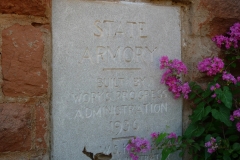 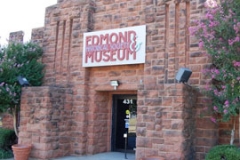 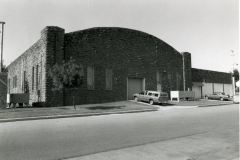 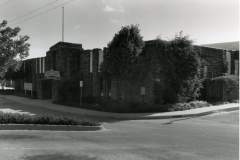