Two side-by-side rectangular units of 101 feet by 124 feet and 56 feet by 84 feet make up the Sperry Armory. It is constructed of rusticated and coursed native sandstone; over the drill floor the roof is arched, while over the smaller section it is flat. Over both are parapets capped with pre-formed concrete slabs. Singly placed window openings with pre-formed concrete sills are elongated and filled with metal casement windows. The facade of the front entry is slightly extended from the remainder of the wall which then steps into the slightly recessed door. There are four side and one rear garage doors in the larger section of the building.
Construction of armories across the state was the first major undertaking of the WPA in Oklahoma and was designed to help get large numbers of the economically distressed through the difficult winter of 1935-1936. First and foremost it was a social program, which largely succeeded in its primary goals. The Sperry Armory is a continuing symbol of that accomplishment. And it also helped revitalize the local business community, pouring wages of some 100,000 man-hours of labor into Sperry’s local economy. Equally significant is that it played a role in helping to prepare a unit of the 45th Infantry Division that, with sister units, would contribute so much to the American military effort during World War II in Europe. Architecturally, the structure is notable within the community in terms of type, style, workmanship and materials. Indeed, it is the only WPA structure left in the community. 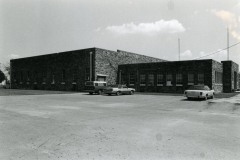