This school of eight or more rooms is a rectangular (225′ x 67′) constructed of cut, coursed, and rusticated native stone of buff and auburn colors laid randomly. The roof is hipped with intersecting valleys and gables. The gable ends have stepped parapets; over the gym the roof tails off into a cat slide. On the front facade, the double door main entry with side and transcom lights is located beneath a centrally placed gable and is accessed by steps with sidewalls. Facades that extend down from gables on the ends of the north front have three vertical insets filled with brick. Most of the windows are placed by threes; the windows at the entrance are paired. All windows contain cut limestone sills. The windows of the attached gymnasium are placed in threes and are arched; some have been filled with wood inserts. Elsewhere new energy-efficient windows have been added, but these do not impeach the integrity of the structure.
The Wainwright School and Gymnasium was one of the latter educational complexes constructed in Oklahoma by the WPA. As such it is important architecturally for the maturity of workmanship the structure demonstrates and the sophistication of educational design. It suggest, too, that as late as 1941 the disastrous consequences of the depression were still being felt in southwestern Muskogee County, for the Wainwright project infused wages for some 92,000 man hours of labor into the local agricultural economy. At the same time the project permitted the employment of hard core reliefers who continued out of work despite some general improvement of economic conditions nationwide. Educationally the building is significant because at one stroke the WPA permitted Wainwright to have totally new facilities for every grade level. In Wainwright, the WPA meant educational reformation and academic excellence.[1] 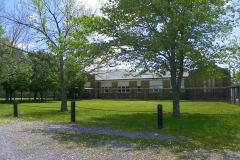 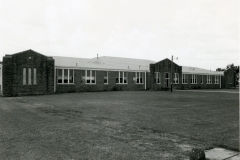 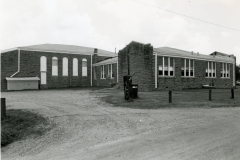