Still being used as Auditorium with events scheduled.

The Ardmore Municipal Auditorium, is a two-story, blond and red brick, Art Moderne style, rectangular building with a north-south orientation. The building was constructed in 1941-1943 by the Works Progress Administration and incorporated the existing Convention Hall into the new construction. Local architects J.B. and Ben White, who also designed the WPA fairground project, designed the building. The auditorium has combination flat and low-pitched barrel rook with a parapet and a concrete and brick foundation. Various events have been held in the building, beginning with the American Legion’s Bond Rally Boxing Show in January 1943. The Ardmore Municipal Auditorium retains a high degree of integrity. Changes to the building include the addition of two metal penthouses on the roof, cloth awnings on the public entries and front windows, addition of the marquee sign on the northwest corner of the building and replacement of the public doors with modern, aluminum, glazed slab doors. The most notable modification is the addition of the marquee sign that is more Art Deco in style then Art Moderne. The sign, however, does not interfere with the ability of the building to convey its significance. Overall, the auditorium retains a notable degree of integrity, including location, setting, design, materials, workmanship, feeling and association. Although the town of Ardmore was accredited with helping”..Oklahoma achived national oil leadership..” by 1920, as well as reportedly providing fifty percent of all oil used by the Allied powers during World War I with the Healdton oil wells, the depression highly affected the region. Ardmore’s 1920 census shows the community’s population of 14,181 and with the cotton, oil and railroad industries slowing losing revenue the unemployment rate increase dramatically.   During the 1930s Great Depression local factories and three of the five local banks closed, as well as four of the five oil refineries. With the advent of President Franklin D. Roosevelt’s New Deal policies and programs some relief was brought to the region and citizens of Ardmore with many WPA projects to assist the unemployed. WPA guidelines required that a “tax-supported public body” sponsor the project which had to result in a permanent and useful addition to the community. These sponsors could be federal, state, or local agencies. The majority of projects were developed by county, city, town and village governments and agencies. The project sponsor provided partial monetary support, usually in the form of land and materials, as well as engineering and architectural plans and specifications.

In August 1940, an advisory committee of 25 leading Ardmore citizens scheduled a meeting with the city commissioners to “launch a program to build a new convention hall and additional permanent buildings at the county fairgrounds.” These amenities were to enhance the available facilities in Ardmore to attract larger conventions and events which in turn would boost the local economy. By October, the proposed plan had grown to include $25,000 (later $15,000) for fire equipment, $20,000 to enlarge and improve the Ardmore airport and $5,000 to erect an extension on the library building. All but the fire equipment bond of the projects to $200,000. The city scheduled a special election for November 26, 1940, to vote on the five bond issues.

The History of Carter County. Fort Worth, Texas: University Supply and Equipment Company, 1957. 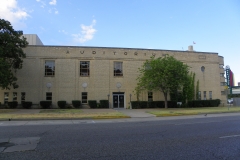 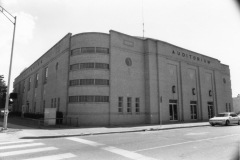 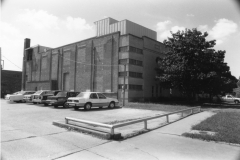