“This one-story buff brick building, located at 301 N. 8th Street, was constructed by the WPA, as were several local school buildings. A bronze plaque at the entrance show it was constructed in 1937, however, the NRHP nomination form shows 1939. The Colonial Revival style was used, in lieu of the typical native stone construction. The architect was Kenneth T. Price…

The Duncan library represents the last large WPA project in Duncan and was completed in 1939 after the original framed building was removed from the library lot. While awaiting for WPA funding sources to be approved the books were temporary moved to the Junior High school Gymnasium and repaired and rebound using another WPA project. After the $16,000 was allocated by the WPA for the construction of the new building ground was broken in the summer and the foundation was poured with the interior and details finished by December with the grand opening on December 12, 1939.[4] 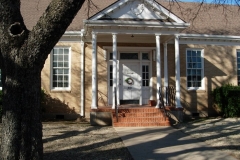 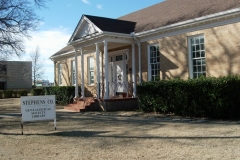 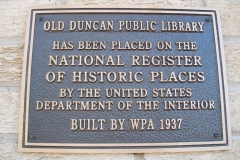