Crystal Beach Park is a multi-use recreational facility that consists of the following WPA structures: 1) a bandshell; 2) a bathhouse; and 3) a tennis court.
1) The Crystal Beach bandshell is a rectangular (90′ x 30′) structure constructed of poured concrete and uncut native stone laid in a random rubble pattern. The shell itself, constructed of concrete, is a series of semi-circles that diminish in size from its front to its rear. The floor of the shell sits on a raised foundation of cut stone and is a slab of poured concrete. On the sides of the shell are small, one-story rooms fashioned from uncut native stone that are accessed from the rear via single-door entryways. Over these the roof is flat with parapets. Window openings with concrete sills have been filled with wood inserts.
2) Situated just northeast of the bandshell, the Crystal Beach Bathhouse is a single­story, L-shaped (80′ x 32′ with a 48′ x 32′ extension) structure constructed of uncut native stone laid in a random rubble pattern. The roof is flat with parapets capped with cut native stone. At the external corner of the “L” the entrance to the structure is covered by a circular porch of poured concrete supported by nine concrete columns. The columns lend the building a Roman-spa quality. Beneath the porch is a circular counter where bathers pay admission charges to the bathhouse. Metal encased windows are encompassed by cut stone sills, jambs, and lintels. Doorways through which bathers once exited to the beach of Crystal Lake have been filled with concrete blocks. These inserts and the construction of a swimming pool just north of the bathhouse have not impaired the architectural integrity of the building.
3) The Crystal Beach Tennis Court is just west of the bandshell. Lined for two courts, it is a rectangular concrete slab that measures 112 feet by 109 feet. Iron posts supported the nets. Backstops of wire and iron poles sit on the north and south sides of the court. A two court slab just to the west of the nominated facility appears to be of more recent construction; it does not, however, impair the integrity of the original courts.

1936; builder/architect: Louis Williams for the bathhouse; for other structures it is unknown
The Crystal Beach Park is an exceptionally significant resource for the Woodward community. Indeed, it has been and is an integral part of the cultural, social and economic life of the town and the region. The bandshell fostered cultural events; the bathhouse and tennis courts promoted recreation. And these contributions have continued for almost one-half century. Construction of the different facilities themselves was a particularly important event. One of the so-called “Dust Bowl” counties of Oklahoma, the \V oodward region was economically devastated by the extreme droughts of the mid-1930s compounded by the increase in population between 1930 and 1940. The WPA construction program poured some 50,000 man-hours of wages into the local economy, a sum that softened the impact of the depression in the business community. The destitute agriculturalists that found employment on the projects had their poverty eased and their morale raised. The facilities are also significant resources architecturally. As WPA structures the bandshell and the entrance to the bathhouse are unique. Locally, of course, nothing compares to the different types of structures, their architectural styles, and the nature of workmanship. Even building materials are unique. [1]

Crystal Beach Park is located on 1st Street on the east side of Woodward. During the period of 1935 to 1936, many projects were completed in this park. These original projects included a large grandstand, a race track, drainage ditches, a bathhouse, tennis courts, a bandshell and an entrance and wall. The bandshell, grandstand and entrance wall remain today.

The grandstand is a large concrete and brick structure, still in use today, as is the bandshell where entertainment is regularly performed. There is a newly built water park, but we were unable to locate the original bathhouse.

The entrance consists of a wide vehicle drive flanked by white granite rock pillars and a 3 ft. high granite rock wall which extends across the front of the park along 1st Street. Every 30 feet or so, the wall has a slightly higher pillar. Crosses are constructed along the wall by leaving out rocks in the shape of a cross.

The park is actively used for sporting and entertainment purposes, as well as recreational activities. Each pre-Christmas season, the park is lit with lights in an event known as Crystal Christmas. (You will see lights and decorations in our photos as we were here in late November).[3]

Photograph used for a story in the Oklahoma Times newspaper. Caption: “A beautiful, permanent band shell is the first public works administration project to be completed in the Panhandle district, officials announced Friday.” 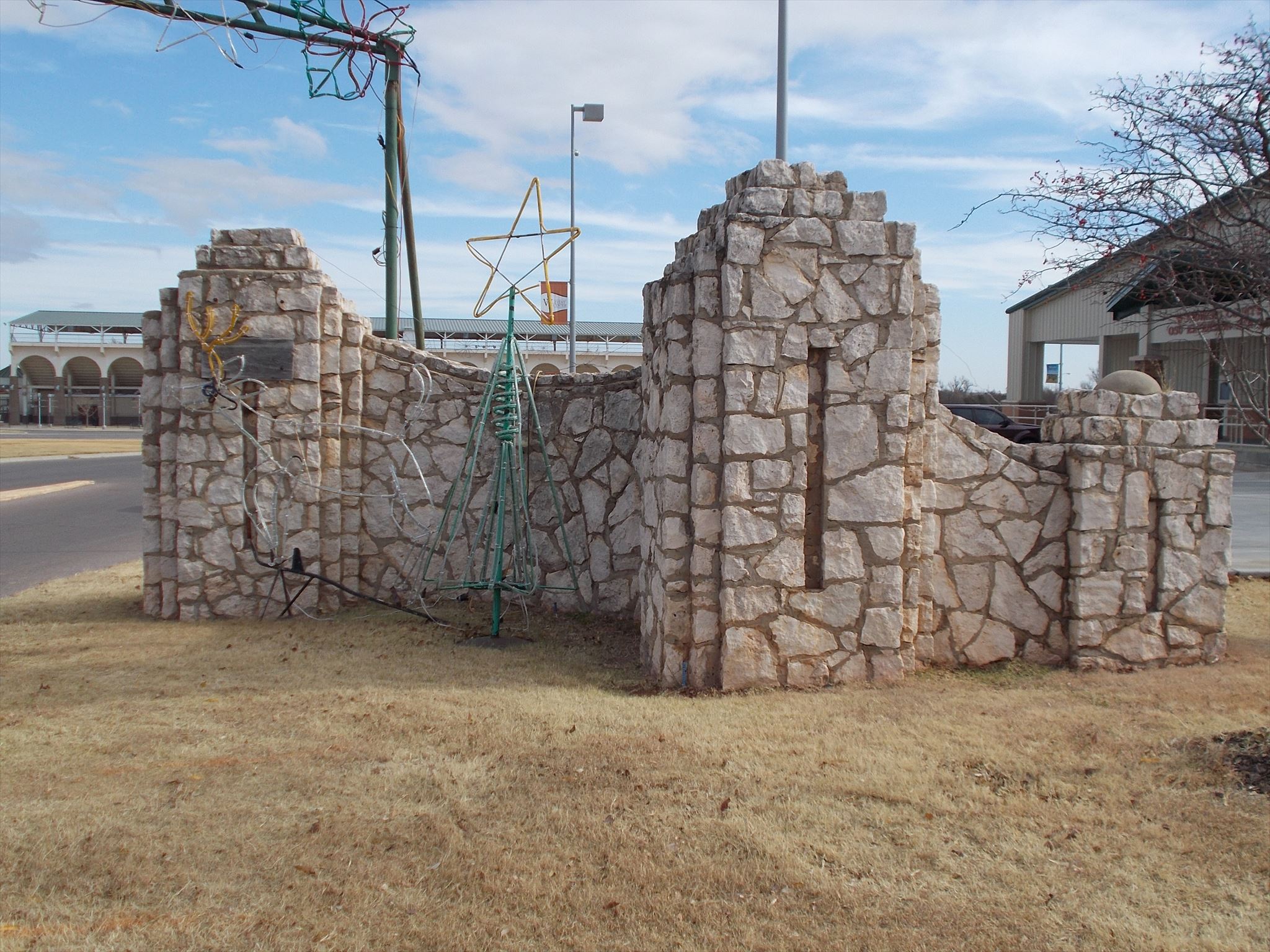 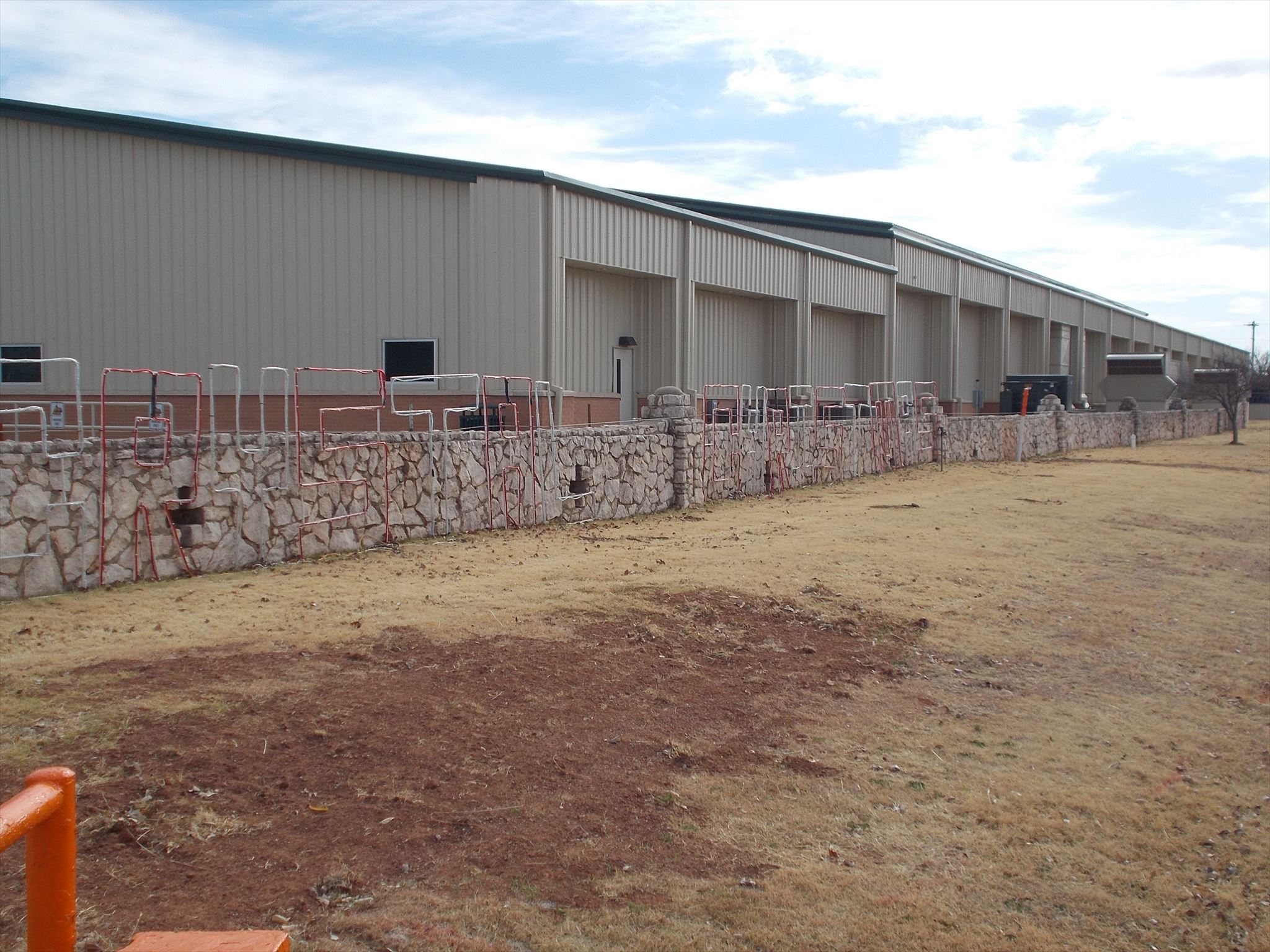 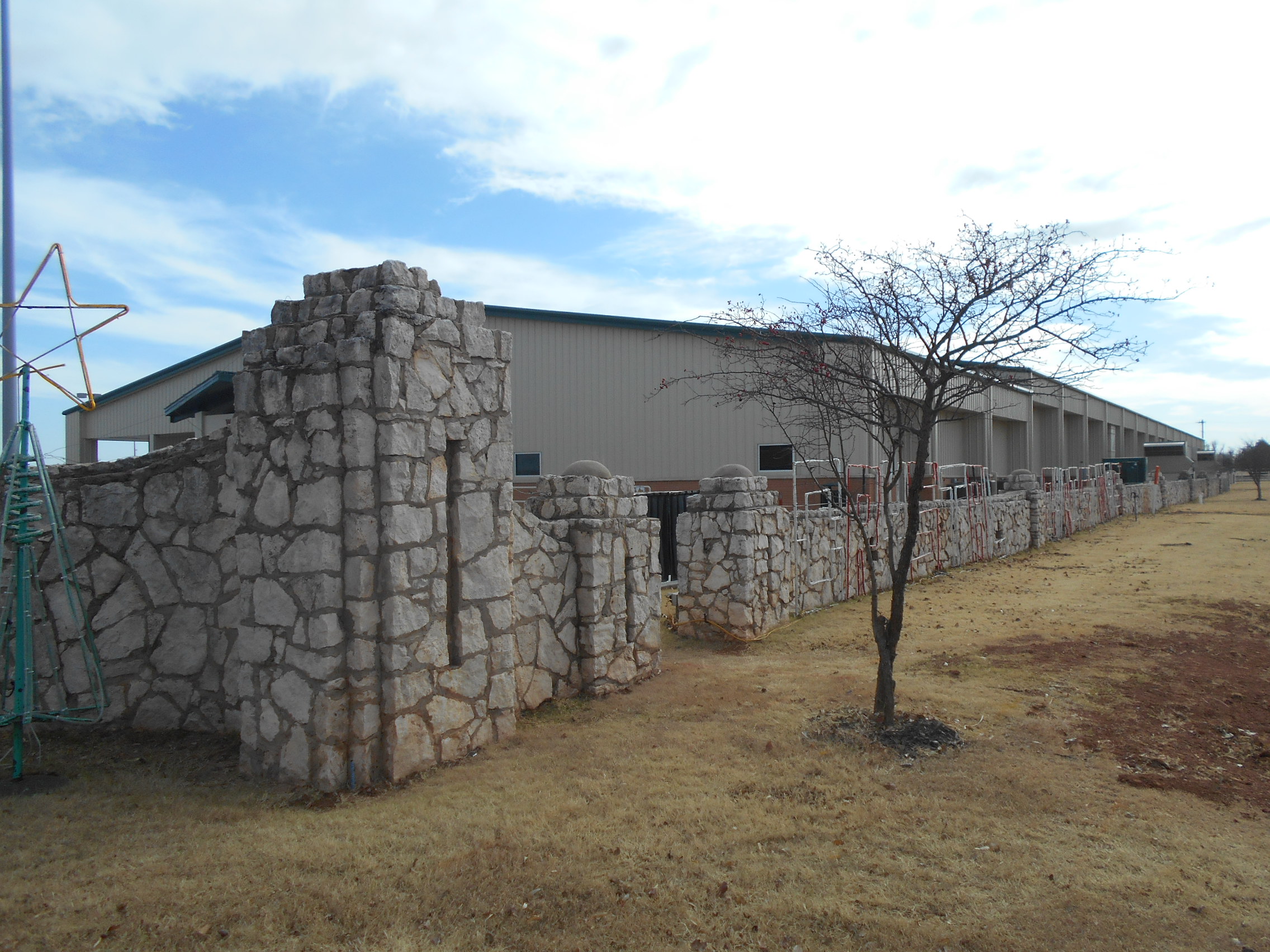 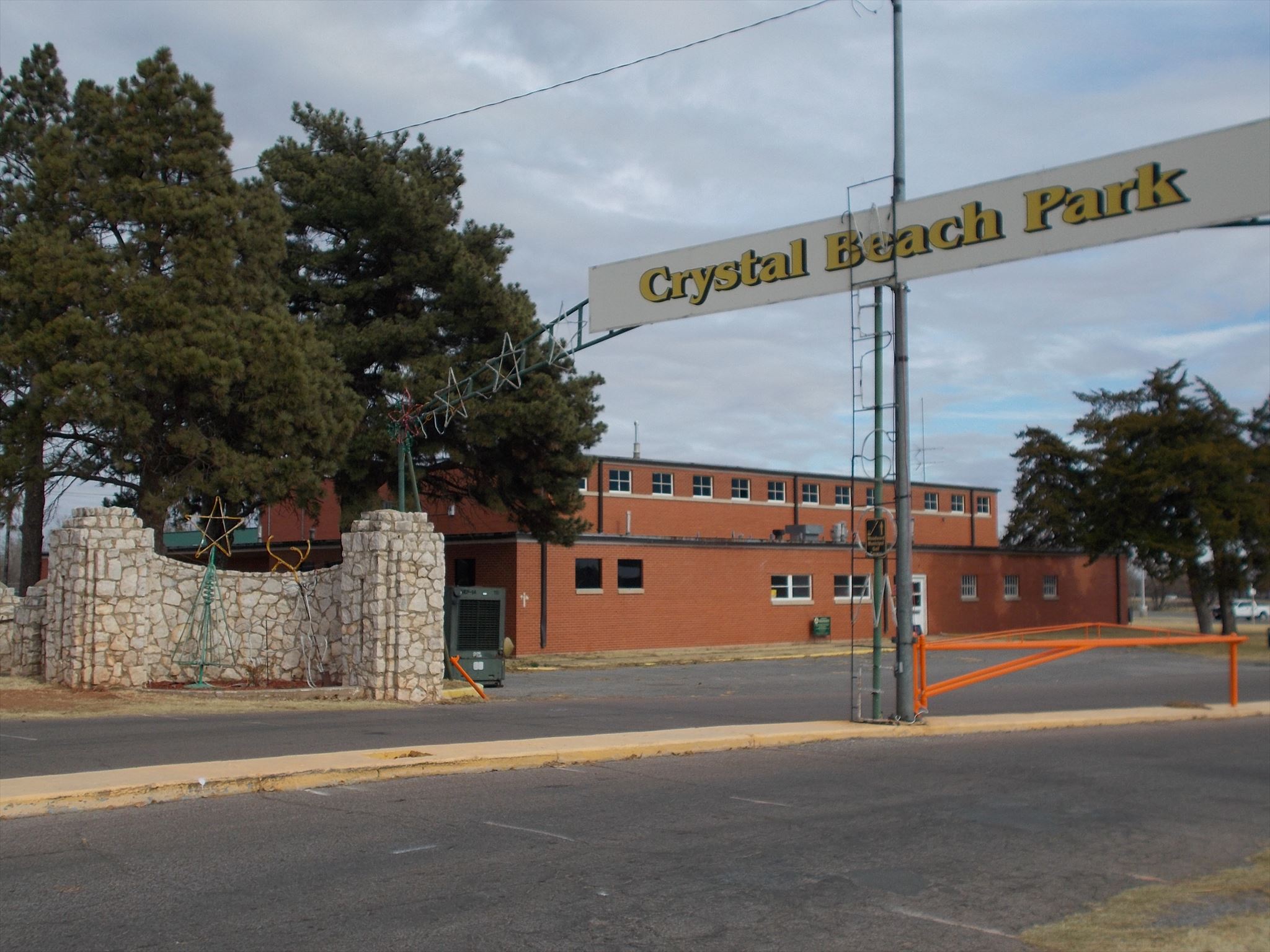 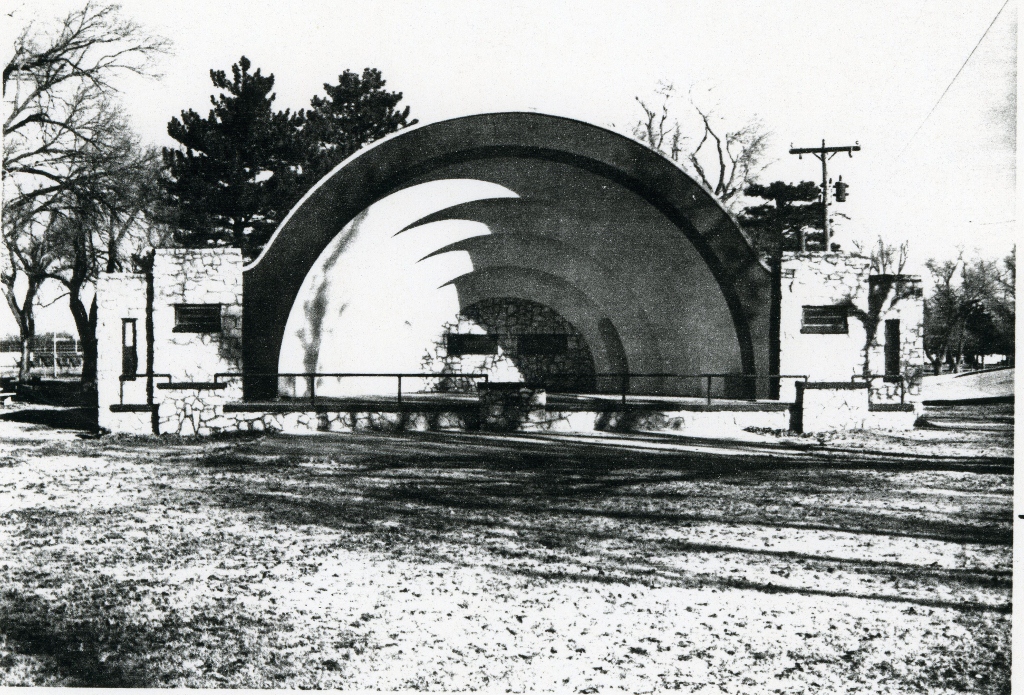 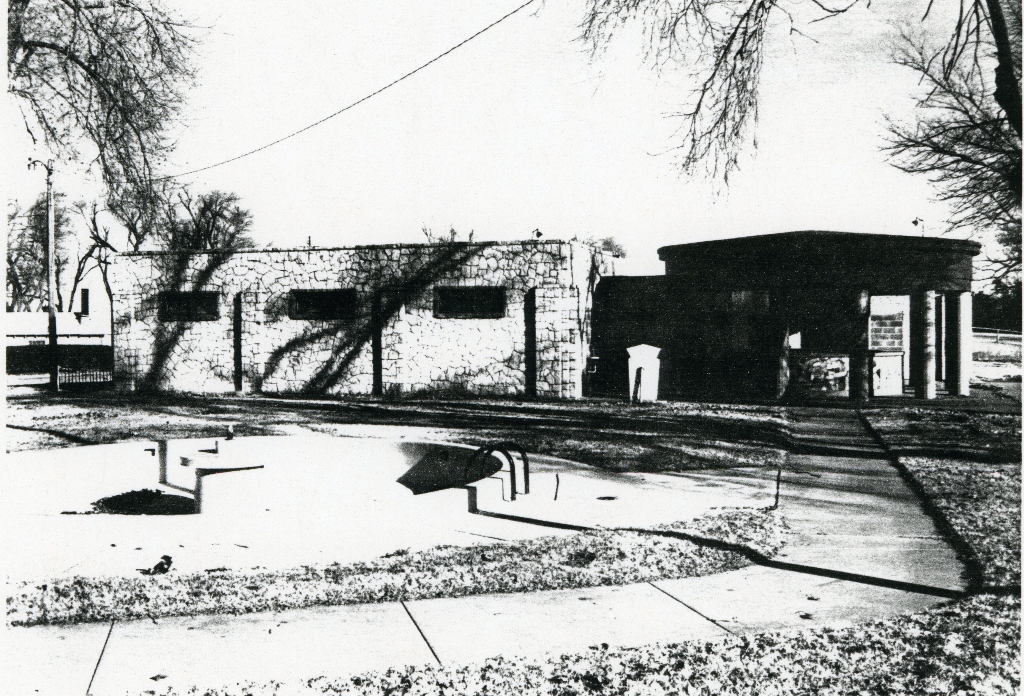 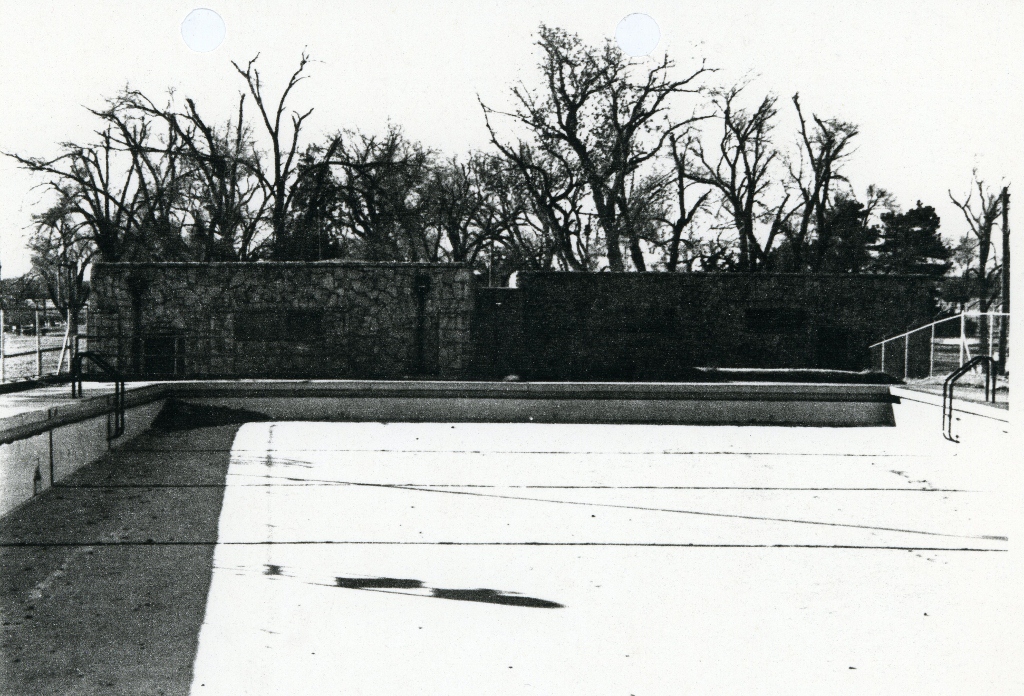 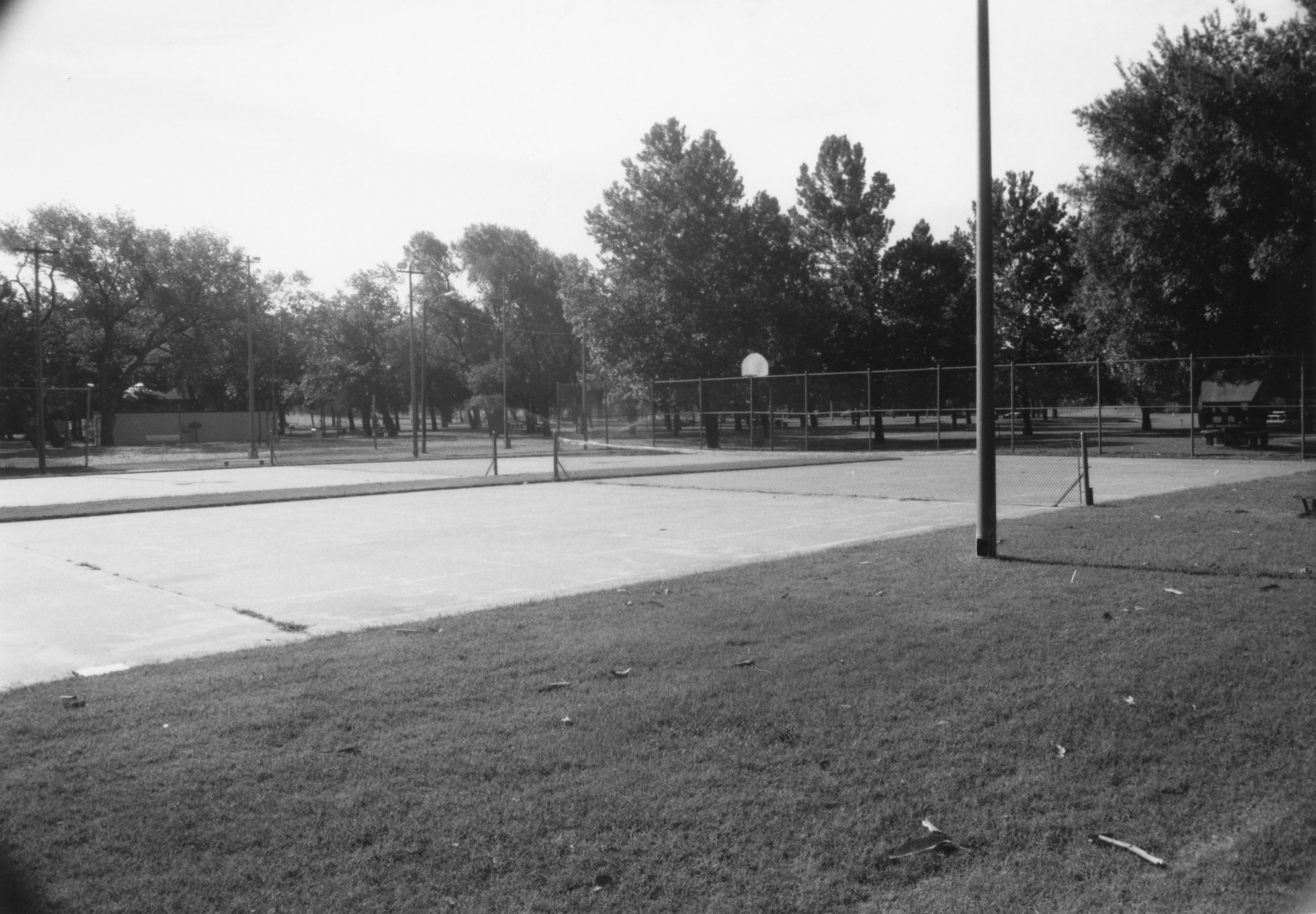 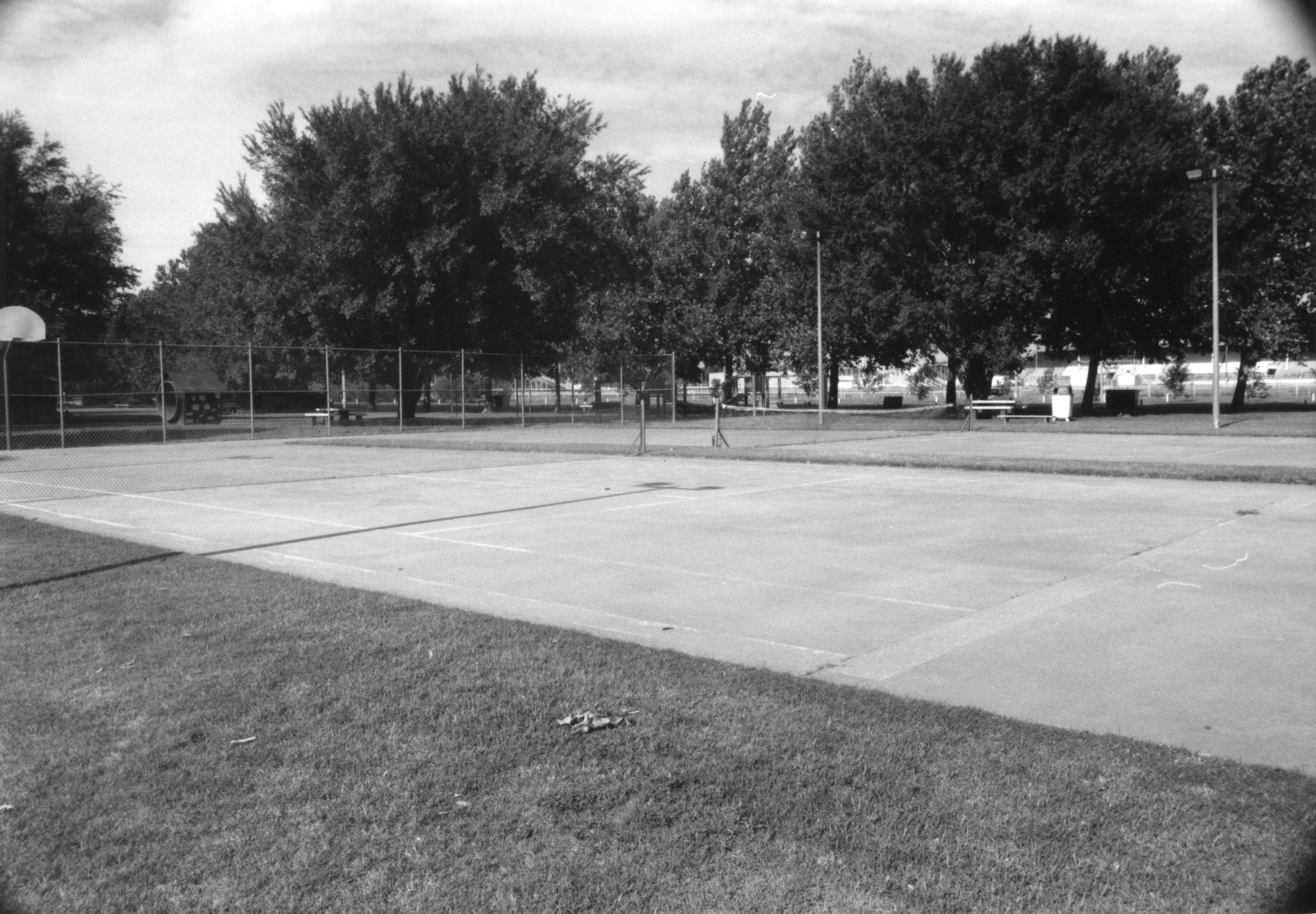 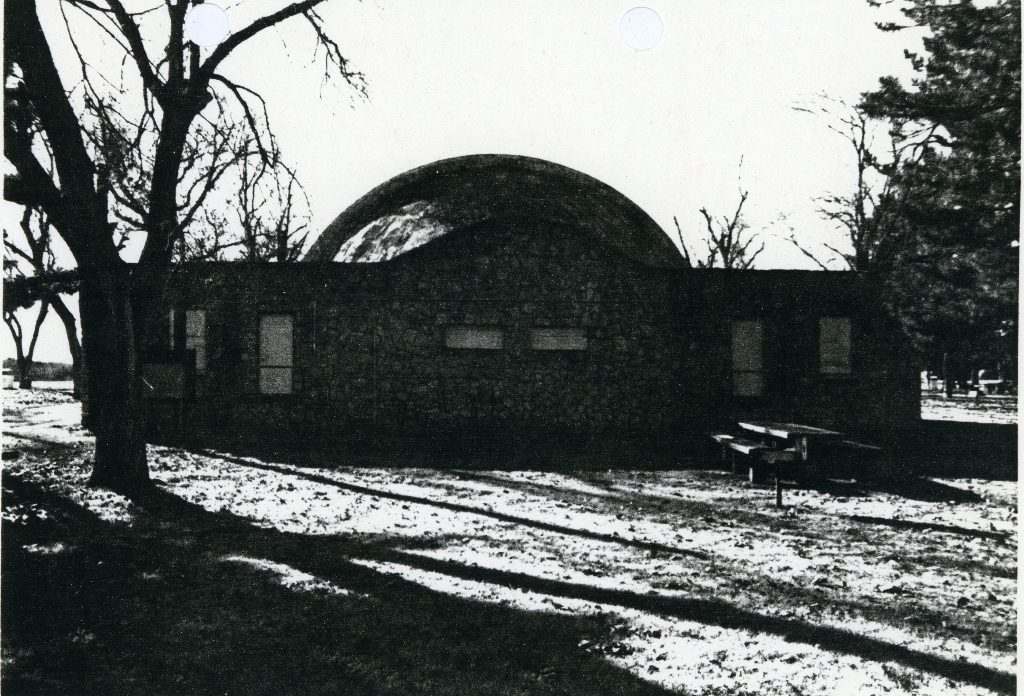